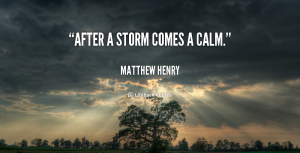 So you had a fight? Take a breath, remain calm, and relax. Every relationship goes through arguments, disagreements, and fights (not physical, that’s not cool). So how do you deal with that period after the storm? You know the moment before the calm comes when you are still angry and you may be thinking about doing something or saying something you may regret in the future. It’s hard not to want to retaliate especially when you feel wronged by your significant other. Let’s explore how to handle that time after the storm.

Time out.
In past relationships I always had to have the last word. (My boyfriend would argue that I still do LOL.) I had to realize that everything I was thinking or feeling was not appropriate to say so now I TRY to end the conversation before things escalate too far. There is nothing worse than intentionally trying to hurt someone who hurt you. Two wrongs never make a right. When we talk, yell, and scream out of anger we end up regretting it in the future. Take some time to calm down, regroup, and analyze your part in the argument. Remember that you love this person.

Texters never prosper.
I know I am not the only one who ends a phone conversation and then realizes that I forgot to say something and texts it when the heat is still high. STOP. NO. DON’T. A text message is never the right way to discuss something important because texts do not come attached with tones and emotions. It is very easy to read a text and misconstrue what the person means especially in, during, or after an argument.

You don’t want that old thing back!
I can remember a time in my younger and naïve days when I use to have an argument with someone I was dating and when he would upset me I would reach out to an old flame. This is the NOT the answer. There is a reason you left that guy/girl in the past and do not forget that reason. You and your significant other maybe fighting for a moment, but what seems like forever will be over before you know it. You do not want to be back on cloud 9 with your “boo” and then trying to juggle texting your ex on the side. It creates drama and mess that you both do not need.

The calm will soon come.
I know it’s hard when you have an argument with your significant other. Especially when it happens on a day when you have absolutely nothing to do or at night when your normal routine includes talking to them until you both fall asleep. The great thing about a healthy relationship is that one of you will eventually try to make amends with the other. When that time comes be respectful, listen, and agree to move forward.

In summary, “it’s all about finding the calm in the chaos.”

A little bit of everything.

Changing the world one lover at a time.

Life as I know it and a few other things