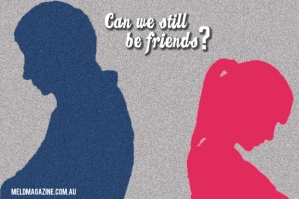 One of my favorite shows is “A Different World” primarily because of the relationship between Dwayne Wayne and Whitley Gilbert. Whitley and Dwayne had a rocky start, but somewhere in Season 5 they decided to take their friendship to the next level and get into a relationship. If you watch the show then you know that Dwayne and Whitley decided to end their engagement primarily because Dwayne went on a date with another woman, but also because he and Whitley weren’t as compatible as they thought. Since they had all the same friends and still worked closely together they decided to stay “friends.” Let’s be honest people we all have ended a relationship with the same conclusion: we will always be friends. But is it really possible to be friends with an ex?

Webster defines a friend as, “a person whom one knows and with whom one has a bond of mutual affection, typically exclusive of sexual or family relations.” I think Webster hit it right on the head. It’s not possible to be friends with someone you have been intimate (emotionally, mentally, or physically) with…immediately. Hear me out for a second. When I think of my friends I think of people I can call no matter the time of day with my joys, fears, and drawn out love stories. If you end a relationship with someone and you do not feel comfortable talking to them about another guy/girl then you are not ready to be true friends. Even if you feel comfortable, if they are not ready to receive that information without hidden anger or jealously then they are not ready to be your friend.

With time, SPACE, and self reflection I do think it is possible to be friends with someone you have dated in the past, but past is the keyword. You cannot be true friends with someone you just dated two weeks ago and if you can then you didn’t invest much into that relationship.I think as young people we are naive in thinking that someone we have invested so much time in will always be around when the sad reality is that time invested is not always good time.

If you have an ex and you want to truly be their friend you have to give it time. When we rush from relationship to friendship we end up hurt or falling back into a relationship we wanted out of. For example, you broke up two weeks ago, but because you decided to be “friends” you still text or talk everyday. What’s the difference? I’ll tell you…nothing. One or two things will happen: 1. You will end up back into the relationship or 2. You will end up hurt even more because your emotions are tied to someone who is not technically yours anymore. TAKE TIME!

Towards the end of Season 5 Whitley meets Byron Douglas, a state senator who knocks Whitley off of her feet. Dwayne realizes that he cannot be just friends with Whitley because he still loves her and hates the thought of her being with someone else. He even goes as far as stopping their wedding and asking Whitley to marry him mid ceremony. Of course this is a show, but the point is if you cannot stomach the thought of your ex being with someone else then you are not ready to be their friend.

In summary, make sure you are truly ready before uttering those famous words, “We can still be friends.”

One thought on “Friends after Loverz: Is it Possible?”

A little bit of everything.

Changing the world one lover at a time.

Life as I know it and a few other things